As poets go I am very lazy. My output is not prolific, I rarely enter work for competitions and do little to try and get it into the public arena. In 2013 this did change. It started with a conversation with VAMOS Director Nik Barrera in a café in Heaton. I had written the Pablo Neruda’s Houses poems and wanted to do something which would be part of a VAMOS event to mark the 40th anniversary of Neruda’s death and that of the coup d’etat in Chile, both of which took place in September 1973.

Nik was very supportive and made some helpful suggestions, not least to collaborate with mutual friend Paco Bethancourt, to develop some associated music, but also to meet Patricia Oliart from Newcastle University to discuss the structure of the event. Patricia very helpfully suggested the link up with a former student of hers, Penny Johnson, now lecturing at Durham University. Penny specialised in Neruda’s Canto General and brought a whole new area of expertise to the project.

Once Paco had recruited his partner Aranja to do some visuals, and added Ana Luisa and Alex to the music line up alongside Patricia, the evening was set to go. I just had to work out how to read and deliver a selection of my own poems and Neruda’s in front of an audience, for the first time ever!

We set the date for the 10th July 2013 at the Bar Loco in Newcastle, the venue name aptly reflecting the way I felt at various points in the process, and agreed a couple of dates for rehearsal. 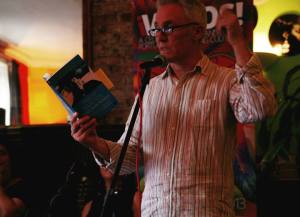 As someone new to performance in general, and reading my own work to an audience in particular, much of the period leading up to the event involved me in hiding my blind panic at the prospect of doing any of this. If I slipped, and the others spotted my fears, they never said so.

My own private rehearsals involved much pacing about the kitchen reading the poems out loud, getting a feel for the rhythm and cadences of Neruda’s verse and trying to naturalise my delivery. The process led me to make some changes to my own poems, which I had wanted to tweak for some time but was compelled to do so once they were read out loud.

Penny agreed to read selections from the Canto General in Spanish as well as the famous I Will Explain a Few Things from Neruda’s selection Spain in Our Hearts. The evening would not only be international but multi lingual!

The text published here does not contain Penny’s text nor the songs performed by Paco, Patricia, Ana Luisa and Alex or indeed Aranja’s visuals. Without them however the night would not have been such a success. I can only thank them again for their collective and individual contributions and to Nik for giving us the chance to make it work.

I can only hope that the remaining narrative and my own poems, without those of Neruda, can stand up without the support which made the event itself such a success.